Race Report - Into the woodshed


I don't think I've ever experienced such a battle in the final lap of any race as I did Sunday in Carpentersville, number 5 in the Chicago Cross Cup series.

After the typical first lap disaster on probably the most technical of courses yet this season, in which I went into the tape twice and endoed once, not to mention getting passed at each barrier remount, I found myself in a knife fight for a top 15 placing among three other riders, Sasha Reschechtko (Tati), Justin Merkey (Rhythm Racing), and Tyler Avery (Pegasus). We constantly stole and gave up lines to each other turn after turn, or tried to drop each other in the pitted and rutted straightaways. 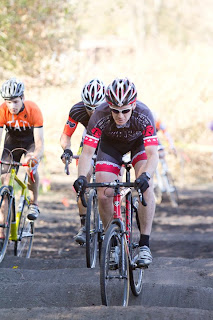 As we raged into the final sweeping arc before the last u-turn to the line, it was Justin, me, and Tyler. I shifted to the big ring and tried to pull away but immediately we were elbow to elbow. I stupidly was still trying to move up on right, but that would've sent me into the tape and a tree on the final right u-turn - or would've crashed all three of us out, so by time I dropped back to reposition myself, it was far too late. Tyler broke free at the same time, and I crossed the line 3rd out of that group for 16th place.

I was pretty pissed at myself for misplaying the end, but once the High Life was cracked open and I was watching the 4Bs negotiate the pump section, all was again right with the world.

Overall the best day yet spent racing this fall. I had my best placing yet in the 30+ (22nd) - even while washing out on the first lap heading into the pumpers and face-planting in a turn - and the long-awaited Chubby Spud found its way into my hand once again: 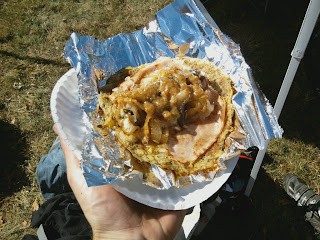 Incredibly, I've moved up two places in the overall standings to eighth - wait, are we rewarding mediocrity here? I'm gonna have to start red-baiting this obviously socialist series?!? Don't worry, my much-harder-working call-up mates; I'm traveling the next two weekends in a pumpkin-carving, cider-drinking, corn-maze-claustrophobia-panicked fury, so that current placing will drop with the November temperatures. While Bryan Lee is getting his call-up dressed as Lady Gaga in a raw-meat skinsuit, I'll drinking all of my dad's beer while handing out Halloween candy on his porch wearing a wrestling mask.