Thank you BBVP, Team Pegasus, and Chicago Cross Cup, for another stellar race in the 2010 series. Last year, Dan Ryan Woods was a vicious kick to the baby-maker, and renaming it Elvis Cross changed nothing. Well, almost nothing: 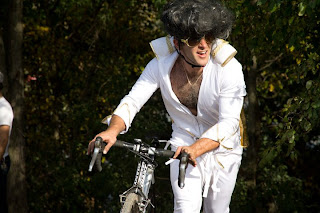 It was hard to get out of bed, harder to get to the office today, and hardest to even stay awake once there:

My placing in this category has trended downward since opening at 23rd in Jackson Park. The races have gotten more technical and hillier (or obstaclier, in DeKalb) and the competitive top half is getting stronger each time out. I started mid-pack, but then moved back quite a few places while trying to ride up the left-side singletrack: the first time I got caught behind teammate Paolo who had just taken a rear wheel on the chin, upending him; next time I lost traction all by myself, then locked up the front and endoed, finally getting back on once out in the sunlight only to start spinning my cranks madly, not going anywhere. Through the depths of my tunnel vision and frantic gasping, the cacophonous clanging of cowbells, I hear off to my left, oh so casually, “chain’s off.”

Passed a bunch of dudes, ran up the hill on laps 3 and 4, and they all passed me again. Then I passed them again, and I said, “screw it” and decided to try one more time up the singletrack. FAIL w/endo again.

The race was still tons of fun however, mostly because a Team Tati rider in an old U of C kit wouldn’t let me pass him the last time of the second hill, cutting off my line and then opening a gap. I couldn’t quite close it through the final switchbacks, but didn’t let it get any wider by time we were hitting the last barrier. He phoned in the last 200m and I sprinted past him at the line for 33rd. It's the little battles that count for crossers like me.

After some recovery, I staked out some turf by the first 180 turn for the start of the Cat 3s, and nearly became the first off-the-bike relegation in racing history. Mr. Knauf approached to let me know it was Elvis Cross, not Dice Clay Cross. Sorry if I offended anybody.

I promise, later on I had some very clever, PG heckles.

I got a call up for 9th overall, and was 5th wheel into the first turn, but I took it really wide, found the crowd coming up inside, and then after the chaos of the mud (WTF, is this the triathlete division?!) it jammed up terribly and I went through the 180 nearly at a trackstand. I was 8th or 9th coming up on the hill behind a little bit of a gap, when teammate Nick Venice came past like I was waiting to put my bike on the 147. 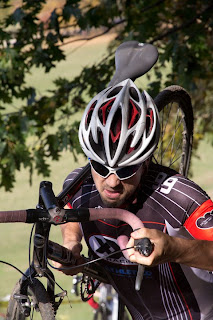 And that was the only thing interesting about that race. Dropped my chain again. It’s funny how you can hear certain voices amid all the heckling, cowbell, and moments of singular pressure. Kirby’s voice cut through my brain like a knife.

I always lost places on the hill. There was one high point I’ll concede, when a VCS passed and tried to drop me on the second hill the second lap, but I wasn’t having any of it, and stayed right on his wheel. He was slower in the turns and that was the last I saw of him. Oh, and the Elvis sighting after coming down the hill, he passed me fast, with a, “on yah raght, brother! A-huh-huh!”

It was a good feeling to know that my 8th time up that hill was the last. 13th. I'm still 10th place overall and in line for a call-up again, but I won't be spending the entire weekend driving out to the suburbs, so I'll just be racing Carpentersville on Sunday. I can only hope and wait through Saturday's race in Waukonda.

Note the ethereal mood of this picture: 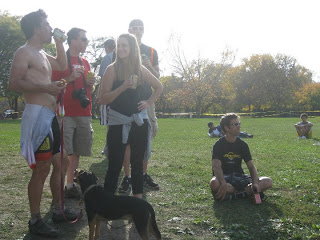 Heaven will always be post-race. The endorphins will freshly flowing, the cooler will always have one more cold beer inside, and a new field of 4Bs will be just about to start. Oh, there's a cupcake... 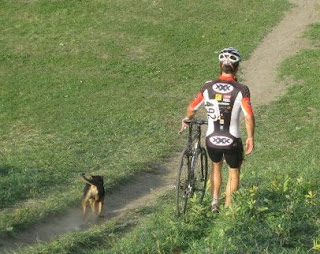