It was a 7am departure on Sunday morning with teammate Evan to Dekalb - far west farm country - for the second race in the Chicago Cross Cup series competition, Hopkins Park.

That's a long way to drive just to ride your bike and drink beer, and I skipped this race last year. Two things convinced me to go this time. First, I'm a bit more dedicated to the discipline now, looking to stay active and have a lot of fun, if not experience great results. I've got a cyclocross bike now, so I might as well use it. With the four races, plus practice I've already been able to get in, I'm seeing better technique, new fitness, and getting to know and hang out with a lot of cool racers. 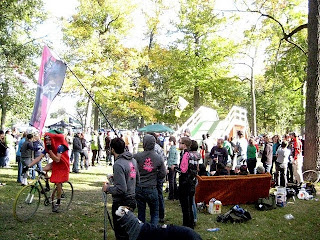 And by that, I meant this: We arrived with enough time to watch the Men's 40 plus field finish up their race and even then I heard it was a somewhat rough transition from the ramp to the grass. So by time I was at the line getting the pre-race instructions from Dave Fowkes, "have one foot in and be off the saddle" the ramp was already in my head. I have a hard time getting in my clips as it is under pressure and I was imagining my feet being jarred off the pedals and being castrated before the first lap was finished. 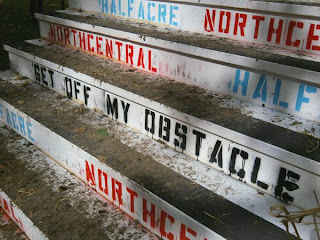 And sure enough, each time up, there were people laughing and heckling me and screaming at me to "just go!!!", still other racers behind me - shoving to get past or jeering. It was about as embarrassing as any number of personal events involving puberty and hygiene in front of the classroom from 6th through 9th grade. 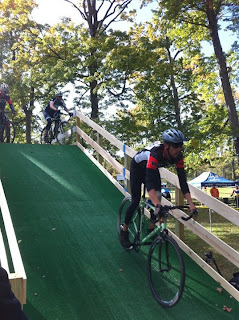 I passed riders, the same ones, multiple times, because they would come flying fearlessly past me again at the top of the ramp, while I flailed to get my foot in the clip before rolling. As well, even the straight sections of the course were riddled with hidden dips and potholes in the grass, preventing me from really attacking to close all the gaps I was giving up. No big-ringing it like at Jackson Park.

Thankfully I wasn't so slow as to get pulled and I was able to get the full 45 minutes of pain and suffering in. 6 laps in all. I was somewhat disappointed with my effort, all the same; I didn't have that same queasy feeling and retching from that last Masters race, two weeks ago - probably from six dead-stops at the top of the flyover helping me to recover. 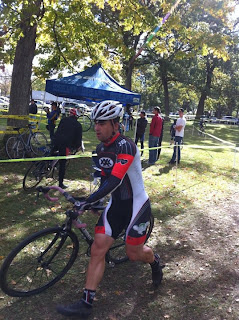 While waiting for the Men's Cat 1/2/3 race to start, I took about five or six practices on the flyover and down the other side, enough to where I felt comfortable jumping back on and rolling immediately. It was good to get that out of the way, and let natural ineptitude in the hole-shot sprint foul things up, per usual.

I actually had a decent line coming out of turn 2 onto the bike path pavement before trying to make up ground on the left dirt shoulder, and then losing five or six spots coming back up over the pavement lip. Even worse, in mid-hurdle over the subsequent barriers, I smacked my head into a tree-branch, knocking me off-balance and catching myself in a Twister-like pose over my bike before righting myself, losing another three or four places. Then, I settled down and into my usual cyclocross routine of playing catch-up and holding off those trying to do the same to me, and getting back into that top ten. 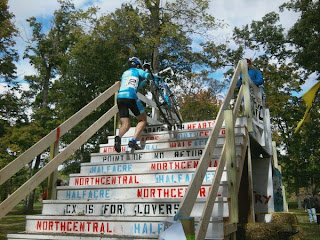 The flyover obstacle was much more fun this time around; I took it two and three steps at a time, and comfortably hopped back on and roared down, back up to speed with no issues, save for a few late clip-ins that prevented me from hammering right away. 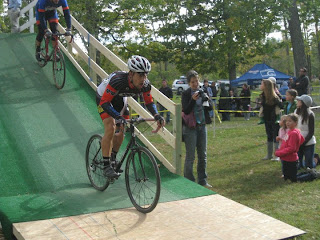 I was really deep in it this race, hacking and grunting, out of the saddle and in the drops, just trying to catch Tony (Beverly Vee Pak), Jonathon (Courage) and John (Main Street Bicycles). I really had no idea where I was, but catching them, and then seeing teammate Nick Venice in my sights (in 6th overall) I knew it was close to the front. 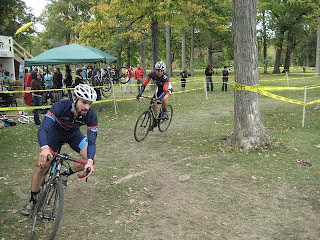 After coming down the barrier the last time with Tony right behind me, I suddenly heard the crowd roar in surprise: "Oooooooooh!" and looked back to see my pursuer off his bike. I found out later his carbon seat post snapped at the jarring transition back to the grass.

I am practically under contractual agreement to only say that you all know how I feel about carbon fiber components and a five-figure salary. Moving on.

The thing about the catch is it teases you forever. The rider ahead of you barely seems to be getting any closer for minute after interminable minute, and then suddenly, you are on top of him and passing quickly. Nick was still way out in front of me with only six turns to go, but then with just three, he was behind me.

Based on some shouts from the crowd to a rider behind maybe a lap earlier, I was positive I'd just moved into 7th place. The last turn was a treacherous 180 around a tree, right in front of the crowd, over jarring, exposed roots. It was very easy to take it too narrowly and find yourself through the tape, or lose traction and slide-out. Thankfully, I took it perfectly and sprinted as hard as I could, keeping the gap open behind me.

That effort was much harder than the 30 plus in the morning. That is what motivation will do for you. That kind of pressure in front and behind you will have you dry heaving in grass, struggling to catch just one more gasp of air, all with a smile on your face, because by yourself, it just isn't possible. We race because it's impossible to push yourself that hard any other way.

I had 11th place. Exactly the same as two weeks prior at Jackson Park. Hey, consistency is good thing. The other placings in the top 10 were quite different this time around, and as such, with a couple of earlier upgrades to the 3s by others, I'll be getting a call-up this coming Sunday at Elvis Cross, Dan Ryan Woods, for 10th 9th place. (upgrades -woot!) 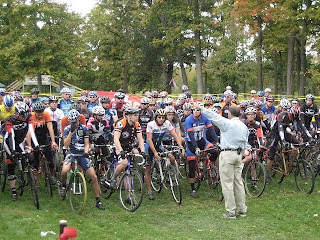